Honors night at Connors State College is an evening that is dedicated for faculty to recognize outstanding academic achievement in the areas of Business, Agriculture, English Composition, World Literature, Mathematics, Psychology, and Science. The LLC Auditorium was packed with over 150 students, parents, friends and faculty as over 30 students were received awards. The event also recognized members of the CSC Academic Team, Student Government, Presidents Leadership Class and Whos Who among Students in American Universities and Colleges. The ceremony wrapped up with the announcement of Mr. and Ms. Connors presented by the President of the College, Dr. Tim Faltyn. This years award went to Lee Stewart, Mr. Connors and Stephanie Anderson, Ms. Connors. These two individuals were the 56th recipients of this award. The tradition of Mr./Ms. Connors had its origins in yearbook royalty dating back to 1952 when both a male and female student were declared Con-Rah Queen and King (prior to 52 there were only Queens). The King and Queen in 1952 were Harold Woodward and Wynema McGuire. From 1954 to 64 the honored students were called Joe College and Betty Co-ed.  The names Mr. & Miss. Connors came into being in 1966 with Larry Steward and Leona Barnett. In the 1970s the Miss became Ms. 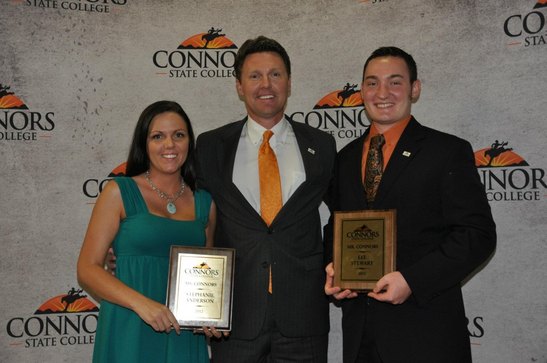